On July 8, Shi Donglong, director of the Foreign Affairs Office of the autonomous region, and his team visited and inspected Yuchai accompanied by Zhao Xiang, deputy director of the Standing Committee of Yulin Municipal People's Congress. Yan Ping, Chairman of Yuchai, and Li Hanyang, secretary of the Party Committee, met with Shi Donglong and his team. 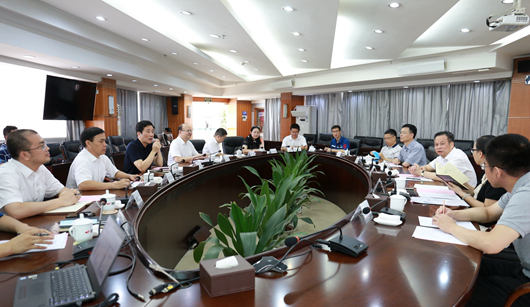 Yan Ping introduced Yuchai's business performance in the first half of the year, focusing on Yuchai's internationalization strategy. He said that in recent years, with the guidance and support from the Party Committee, Government and Foreign Affairs Office of the Guangxi Zhuang Autonomous Region, Yuchai's overseas cooperation projects have been further expanded. Yuchai's international exchange activities such as business contacts with international partners, the construction of Yuchai International R&D Center, the introduction of foreign experts, management cadres and business backbones to study abroad have been increasing, and the internationalization of enterprises has been accelerating. Yuchai will build a world-class engine manufacturing enterprise in ten years. In the process, he hopes that the Foreign Affairs Office of the Guangxi Zhuang Autonomous Region will continue to support the development of Yuchai.