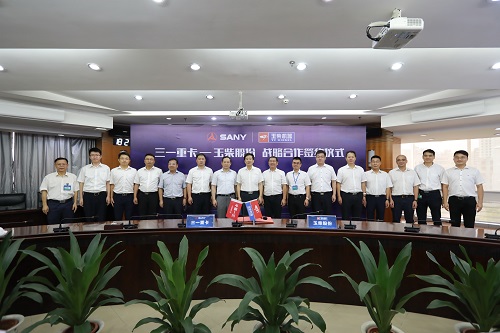 According to Liang, the headquarters of Yuchai gave him a fresh feel during his first visit, Yuchai's advanced production lines from casting, machining to assembly and testing, particularly the newly built world-class China VI production line, completely overturned his views on traditional engine manufacturing and strengthened his confidence in the long-term strategic cooperation between SANY Truck and Yuchai.

According to Yan Ping, the period of implementing the China VI vehicle emission standard is a golden period for Yuchai to move toward a world-class enterprise. Currently, Yuchai's China VI products have been highly recognized by all domestic mainstream OEMs, laying a solid foundation for Yuchai to expand the national market. Yuchai attaches great importance to the strategic cooperation with SANY Truck, and has set up a special team to allocate more resources and create better products and services, so as to fully promote the cooperation between and development of both sides.

According to the strategic cooperation agreement, Yuchai and SANY Truck will further expand the breadth and depth of cooperation in terms of technology, market and supporting facilities on the basis of existing business cooperation, to realize sharing and coordination of resources, and guarantee the dominant positions of both sides as a strategic supplier and a strategic OEM.  In addition, both sides will also make concerted efforts to promote the construction and integration in terms of marketing mode, marketing channel and aftermarket, so as to boost long-term and coordinated development of both sides in all aspects.