On July 6, Lu Xinshe, Secretary of the Party Committee of Guangxi Zhuang Autonomous Region and Director of the NPC Standing Committee of Guangxi Zhuang Autonomous Region, visited Yuchai, highly affirmed Yuchai's innovation achievements, and encouraged Yuchai to continue to be innovative, catch up with the world-class level, and set up a Guangxi's industry benchmark.

In the newly built Yuchai Science and Technology Museum, Yan Ping, Chairman of Guangxi Yuchai Machinery Co., Ltd. (Yuchai) reported that Yuchai overcame the adverse effects of the epidemic in the first half of the year. Specifically, Yuchai Group registered sales revenue over RMB 23 billion, up 13.42% year-on-year, and Yuchai, a core subsidiary of Yuchai Group, achieved an increase in sales revenue by 28.9% year-on-year. The sales volume of China VI engines and heavy-duty engines both reached new highs. All these indicated that Yuchai had carved out a unique path of high-quality development. Yan also focused his report on Yuchai's innovation initiatives and achievements in the research and development of new products conforming to China VI emission standard, the reform of management system and the construction of talent team in the past three years.

After hearing that Yuchai had achieved excellent performance, Lu Xinshe asked Yan: What's the reason for Yuchai's growth against trend? "It mainly owes to innovation", Yan said. Lu Xinshe was very happy and said that innovation was the only way for enterprise development and the key for an enterprise to remaining invincible. Lu Xinshe enjoined that entrepreneurs should consider future competition and market changes, and produce, plan and innovate products generation by generation to catch up with the world-class level.

At present, Yuchai is in the peak production season, with all equipment on the China VI machining line in the No. 3 engine workshop of the Manufacturing Division currently in full operation.  According to Yan's report, Yuchai registered a year-on-year increase in engine output by 10% in the first half of the year, with the engine output exceeding 40,000 sets for 4 consecutive months since March, and that in the second quarter setting a new record for the same period in the past 5 years.

Standing in front of the newly built and world-class advanced China VI production line, Lu Xinshe said to Yan while looking at the machining center in operation: "Two years ago, Yuchai in my eyes was already great, but I don't expect it has changed so much two years later. I am very happy that there are enterprises like Yuchai in Guangxi!"  Lu Xinshe enjoined that Yuchai should be prepared for danger in times of peace, do a good job today, prepare for tomorrow and plan for future, and always keep its leading position in the field of technological innovation.

Yan said that after falling within the jurisdiction of the autonomous region, Yuchai has just ushered in the best period of implementing the China VI vehicle emission standard. Yuchai will basically build a relatively complete and world-class management system in three years, surpass its domestic counterparts and leap to the top in China's internal combustion engine industry in five years, and become the most advanced engine manufacturer in the world in ten years. 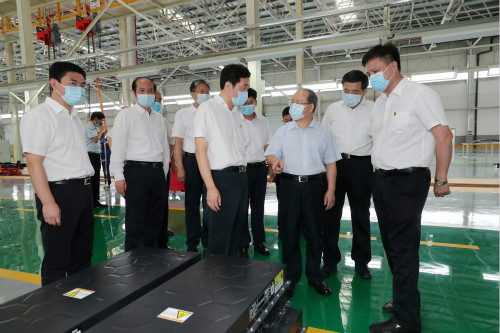 Lu Xinshe highly affirmed the spirit of Yuchai's management team: ambition, high standard, strict requirement and striving for the first. He said that the Party Committee and the People's Government of the Autonomous Region would fully support Yuchai's development and help Yuchai build a world-class enterprise.