In 2019, more and more information about 5G (the 5th generation mobile communication technology) comes into our ears, such as 5G mobile phones launched, 5G network being built in Shanghai Hongqiao Railway Station, and the first 5G demonstration hospital to be created in Guangdong. On April 22, a piece of exciting news came from Yuchai that Xue Jiping, Secretary of the Party Committee and General Manager of China Unicom Guangxi Branch, leads a team to visit Yuchai and has talks with Yan Ping, Chairman of Yuchai Group and Li Hanyang, Secretary of the Party Committee of Yuchai Group. Through talks, a strategic cooperation framework agreement regarding “Internet+” is signed by and between Yuchai Group and China Unicom Guangxi Branch, aiming to create an Industrial Internet of 5G era, promote intelligent manufacturing of Yuchai and further achieve high-quality development goals of both parties. 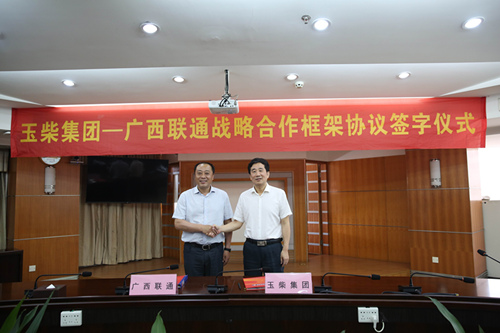 According to the schedules provided by China Mobile, China Unicom and China Telecom, as the countdown of “fully launching” of 5G has begun, 5G will be put on pre-commercial trial in 2019 and officially go into commercial use in 2020. The Industrial Internet, backed up by 5G, will lay the foundation for further advancement of “Internet + advanced manufacturing industry” and have a deep and revolutionary impact on industrial development in all-round aspects in the future.

Seizing the revolutionary opportunity and forging ahead together, Yuchai Group and China Unicom fully leverage their own leading edges in technological innovation and resource integration and build strategic partnership between each other for closer cooperation in business of “Internet + smart factory/park”, business of “enterprise cloud access”, building of smart industrial Internet and application of “5G + industry”, so as to achieve win-win development.

5G network mainly features fast Internet connection, which coincides with the internationally broader bandwidth and faster rate of Yuchai. In the era of China VI, Yuchai will build big data information platforms of Internet of Things and car networking with China Unicom and other communication operators in virtue of its advantages in “Internet+”, elevate its intelligent management and manufacturing to a higher level and expedite the international growth process. At the talks, Yan Ping said that 5G era would serve as the golden age for intelligent upgrading of Yuchai and certainly help Yuchai to have a new breakthrough in industrial Internet.

According to the saying of Xue Jiping, China Unicom Guangxi Branch takes the initiative to choose Yuchai in Guangxi, China and even around the world as its primary partner at the time when 5G and industrial Internet are just emerging. It starts a new journey to compete for leader status in the industry, with expecting results and a bright prospect.