The second Belt and Road Forum for International Cooperation (BRFIC), with the theme of "Working Together to Deliver a Brighter Future for Belt and Road Cooperation", was held on April 25-27 in Beijing. 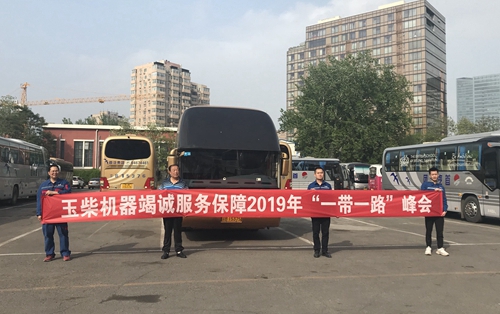 Yuchai, as a representative of the national power, provides transportation service support for the forum.

Powering the Implementation of the "Belt and Road" Initiative

According to reports, there were a total of 457 buses equipped with Yuchai YC6L engines serving the second BRFIC, including 62 Shouqi buses, 185 BAIC buses and 210 Crescent buses. This engine model features reliable performance and rich operation experience. It is a star model equipped for buses serving important events in foreign affairs and shuttle buses serving VIPs.

Yuchai's performance in the BRFIC was highly praised by users.

"Shouqi and Yuchai are committed to providing transportation service support for important events through long-term sincere cooperation". Yangjing, the Director of Tengyu Bus Repair Factory of Shouqi Group Co., Ltd., told reporters that 62 Shouqi buses (including Golden Dragon, Youngman, North Bus and Yutong) serving the BRFIC were all equipped with Yuchai engines. Many of these Yuchai engine models are the "seniors" who served the first BRFIC and the NPC and CPPCC many times. Their good quality and stable power performance have been highly praised by Shouqi's staff.

"Yuchai engine is a standard feature of Shouqi". Yang Jing said that Shouqi would definitely equip Yuchai engines for all buses it purchased.

Like Shouqi, Crescent is also a regular customer of Yuchai and is full of praise for Yuchai. Wen Yanfeng, General Manager of Beijing Crescent United Automobile Co., Ltd., said that Yuchai engines are good in both quality and fuel economy. In particular, Yuchai's service is meticulous and user-centered.

Wen Yanfeng mentioned a "little thing" regarding Yuchai's after-sales service the year before last. In 2017, during a trip to Xianyang, the engine of the bus had a minor fault. Within less than two hours after application for after-sales service, local maintenance personnel arrived at the site and repaired the bus quickly with necessary accessories. "No matter how days later to apply for maintenance, Yuchai will solve problems in the first time, freeing users from worry".

Expanding to Overseas Markets and Gaining More Achievements in Exports

While wholeheartedly serving the BRFIC, Yuchai is also accelerating its expansion to overseas markets based on high modernization and new globalization under the "Belt and Road" Initiative and has seen a rapid increase in its export volume of products.

In addition, Yuchai has also laid a solid foundation for marketing service network to provide strong support for overseas markets. At present, Yuchai has initially established an overseas marketing service network consisting of four routes: "east route" extending from the starting point of the Maritime Silk Road to ASEAN countries such as Vietnam, the Philippines, Thailand and Indonesia; "south route" covering South Asian countries such as Pakistan, India and Sri Lanka; "west route" extending westwards to Egypt and other North African countries on the basis of markets in Saudi Arabia and Kuwait; "north route" covering Central Asian countries.