With layout of China VI products and supported by new energy, Yuchai is forging ahead robustly. 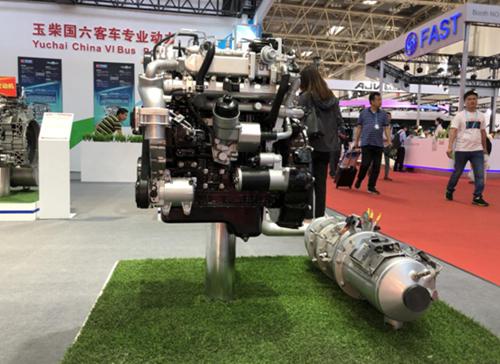 On May 29, 2019 Beijing International Exhibition on Buses, Trucks and Components (hereinafter referred to as “Bus & Truck Expo 2019”) themed by "smart leading and green commuting" was formally kicked off in China International Exhibition Center (New Venue), where Yuchai shows up robustly at the expo with its 16 products powered by China VI engine and new energy. The latest technology and strategic layout of Yuchai demonstrated in all dimensions have drawn great attention of leaders in passenger car industry and the guests present at the expo.

At Yuchai's booth, China VI engines and new energy engines are evenly displayed, with the former including engines of YCY24, YCY30, YCS04, YCS06, YCK05 and YCK08 and six diesel engines as well as two natural gas engines of YCS04N and YCA07N.

"Staying committed to conventional engine and growing new energy vigorously, Yuchai will strive to capture the prospective market via strategic layout of products next", said by Tan Xuefeng, General Manager of Bus Engine Marketing Dept. of Yuchai Machinery, in an interview.

Compared with China V products, Yuchai's China VI engines are prominently improved in comfort, light weight, reliability and economy in addition to significant reduction of emission target. China VI products lead the world in all performance indicators and are superior to similar products of internationally established brand. They are strong enough to compete with world-class brands in the international arena of internal combustion engine industry.

On the basis of huge market value, 1010 Foton AUV buses equipped with Yuchai's China VI engine of YCS04N were formally delivered to Beijing Public Transport Corporation on March 25, becoming the first batch of China VI engine buses launching on the market in China. "China VI engines have created a good market pattern for Yuchai," Tan Xuefeng said, "and Yuchai plans to launch more products on the market in the second half of the year."

In 2020, the China VI emission standard will be fully implemented and will be executed ahead of schedule on July 1 in Guangdong, Shenzhen, Tianjin, Shanghai and other regions. Reportedly, there are 40 China VI buses filed in the Ministry of Ecology and Environment up to now, in which, more than 30 buses are provided with Yuchai's engine. Yuchai's China VI engines basically cover the majority of mainstream OEMs at home.

It is worth mentioning that YCK08, as the first China VI diesel engine certified by the China VI-b emission standard, is also shown at the exhibition hall, becoming a star model in the field.

New energy products have been introduced and the power system for commercial vehicles has been configured completely.

Except 8 conventional China VI engines, the new generation of new energy bus power system upgraded is the highlight of Yuchai for the exhibition.

In 2018, more than 4,000 hybrid power products were sold, with a market share up to 65%. The new energy power products upgraded today undoubtedly provide more support for market expanding.

According to Tan Xuefeng, Yuchai will combine the upgraded new energy power products with the vehicle model in the second half of the year to get ready for mass production next year.