The vast Subei Plain is winded through by rivers and neighbored by seas, dotted by numerous rivers and lakes, and studded with water courses; it is known since ancient times a land of abundance, and land abundant with fish and rice. The waterborne traffic here is highly developed, and densely covered with ships, the poetic scene of Lonely ships and distant silhouette" is hardly seen, but waft of chanty still come from all directions.

The ship engine market in Jiangsu is very huge, and the competition is extremely tense. Yuchai engine is a "Guest" coming from afar, the sand pumping ship engine "reversed the position of the host and the guest", taking up a market share of 70%; the fishing boat engine enjoys a huge increase, the market share of this year is 80%; the canaller is the short slab of Yuchai, and now is the main targeted market segment.

Hao Lubin, general manager of Lianyungang Jirui Electromechanicals Co., Ltd. ---the largest franchiser of Yuchai Ship electrics in North China has resolved to increase the market share of Yuchai ship electrics in its sector to 75% above.

Yuchai products is getting popular around Luoma Lake

Jiangsu Luoma Lake is famous for its yellow sand. Around Luoma Lake there are many sand pumping ships with high racks, like rocket launching tower, gathered in the lake or lined along the lake side, which is unique scenery.

It is known that there are thousands of sand pumping ships on the lake, 70% above has Yuchai engines. Yuchai ship engines are not so since its beginning. Since old times, Jiangsu had been near to rivers and seas; it enjoys a key position for Huai river and the lakes, and a developed economy and prosperous culture. The ship drive power has been a promising business and no one wants to miss this. Especially, for its nearby brands, they are powerful. Yuchai's break-through is a hard endeavor, like rob food from a tiger. 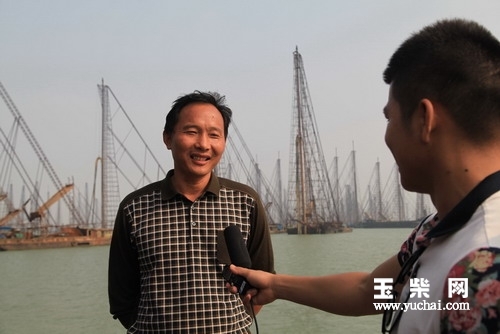 "The Yuchai's break-through of sand pumping ship market of Luoma Lake depends on the quality Yuchai's ship engine." Hao Lubin said. According to his introduction, one sand pumping ship can pump about 2000 tons of yellow sand, when the price is not good, each ton of yellow sand can sell at 7.5 Yuan, the total revenue per ship is 15000 Yuan, if they use engine of other brands, the oil cost is around 14000 Yuan per day, where the oil cost of Yuchai engine is around 11000.

Suo Guizeng and Liu Jiandong are partners; they bought a sand pumping ship in 2012. The ship has two main engines, one is 450 horsepower YC6T engine, the other is 350 horsepower YC6MK engine, and there is also a generator set which has a 190 horsepower YC6A engine.

According to Suo Guizeng, two year ago when they were preparing to buy a sand pumping ship, they had no idea about which brand to choose, they had an inquiry around which they almost ran through the whole lake. This ship is all they had; it is not easy for them to just listen to one voice. At that time the market share of Yuchai is not that high, but it has some popularity, all the Yuchai users said that Yuchai ship engine is less consuming and the power is strong and the service is good too. When it comes to the engine, they become divided, Sui Guizeng recommended Yuchai engine, whereas Liu Jian dong insisted the local brand. To solve this, they stayed on two different ships for a couple of days, finally they chose Yuchai's product.

Liu Jiandong said:" To be honest, I would prefer to the local brand, but to survive, I can only choose Yuchai engine which has better cost performance.

According to their knowledge, for two years these 3 engines never breaks down, this ship costs 100 yuan less than the similar ship with other engines. Now, Luoma Lake's sand is going deeper and the rack is higher, the sand pumping ship is getting bigger, the cost performance requirement for engine is getting higher. At this time, the advantage of Yuchai engine is becoming clearer.

Liu Jiandong pointed at two sand pumping ships not afar and said complacently:" Look, those two ships are also Yuchai, which is recommended by me. "

Suo Guizeng said that Liu Jiandong is "Silent Gourd ", but now you would hear his song wafting around the Luoma Lake.

Back to the old days, the natural beauty of Luoma Lake won the appraisal from Qianlong Emperor--The utmost spring beauty of his territory; today it is dotted by numerous sand pumping ships which forms a unique scenery of Luoma Lake, Yuchai's story become an ageless legend afloat!

Luoma Lake at the foot of Ma Ling Mountain, seen from above, is like the back of a huge horse, its tail gives a sweep to the Jinghang Grand Canal.

Jinghang Grand Canal is the longest ancient canal with largest scale of construction. Today, the Grand Canal is very busy with large and small ships shuttling back and forth on the river. Among these ships, those with Yuchai ships engines are rare.

Why can't Yuchai make a break-through before to such huge canal market?

Tian Runqing, North China region manager of Business department of Yuchai Ship electrics, has his analysis, it is mainly due to two aspects: one is X home brand is really strong in canaller segment, and has huge market share, most ship owners and users prefer this brand, they have strong resistance to other brands; the other is due to Yuchai's engine has insufficient power range, no big power ship engine, and the product quality is not stable.

In the recent few years, Yuchai's product has seen improved engine quality, and efforts have been made in terms of supporting applications and new products, beside quality improvement, Yuchai also pushed out several large horsepower high-grade ship engine, such as YC6T, YC6C etc., and the comprehensive competitive power has been raised in its ship electrics business.

Hao Lubin said: In recent years, Yuchai is becoming strong in terms of sand pumping ship and fishing vessels, and that makes up the weakness and shortage of canaller business. What is encouraging is Yuchai started to pay attention to the canaller engine market since 2012, and formulated a targeted and relevant strategy, and more support is granted to our franchisers. " 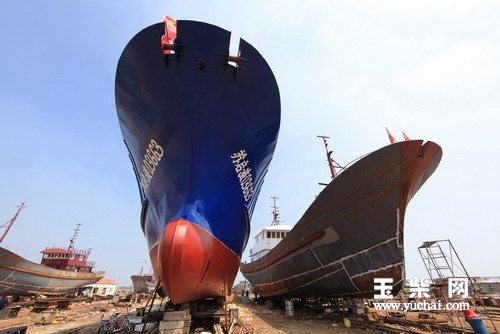 A fishing vessel fitted with Yuchai engine is under construction

To support the break-through of canaler engine market, Hao Lubin set up Xuzhou Shengyun Yuchai Ship Electromechanical Devices Company exclusively, acting as the  general agency of Jinghang canal zone for Yuchai. The company has a grand and majestic office building, which is like a giant man standing along the Jinghang Grand Canal Pizhou section, watching over each cargo ship coming and going.

The reason that I make such big investment, is that Yuchai is a brand with strengths. Hao Lubin said with confidence.

Last year, Yuchai ship engines are fitted on two 68-meter long cargo ships, after a period of trial run, the result is good. According to one of the users, his 3000 -ton cargo ship fitted with two YC6T engines, shipping yellow sand from Luoma Lake to Xuzhou, a return trip would save more than 1000 yuan of oil than the other brands.

Nowadays, Jinghang Grand Canal has severe surplus hauling capacity, the shipbuilding quantity is dropping, and the market competition is becoming more intense. Under such circumstance, users begin to consider the transportation cost as the most critical competition factor, and Yuchai ship engine's strengths like sufficient horsepower, low oil consumption and so on are clear.

At the same time, the Grand Canal water system has been listed among the world cultural heritages successfully, the government has been enhancing the protection of water quality and environment, the inland river cargo ship engine starts to shift towards gas engines. Whereas the Yuchai gas engine, whether it is technology or service ability, is leading the industry, and starts to be fitted on the inland river cargo ships.

"This is a good opportunity, Yuchai is hopeful in winning some market share of Grand Canal cargo ship engines in this round of shuffling.said Tian Runqing

In terms of fishing vessel engines, Yuchai has a high market share in Jiangsu region. It is known that in some shipyard Yuchai's market share is 90% above. This year, Yuchai ship engine output covers 80% more of the whole market output.  The competitors took many powerful commercial policies to snatch the market, but Yuchai has laid solid foundation over this two regions, those policies may have temporary impact but not too big for Yuchai.

From January to September this year, the domestic ship electrics market is austere, the whole sales drops over 10. But Yuchai has seen increase in its sales quantity of ship engines, the increase is about 10 percentage on year-on-year basis, and the sales value has increased more than 20%.