On January 12, Yuchai released the 2025 strategic target, starting a new development process. On the 13th day, Yan Ping, Chairman of Guangxi Yuchai Machinery Co., Ltd., received an interview by reporters from China Daily and Automotive Observer to talk about Yuchai's response to opportunities and challenges in the information age and Yuchai's international development strategy. 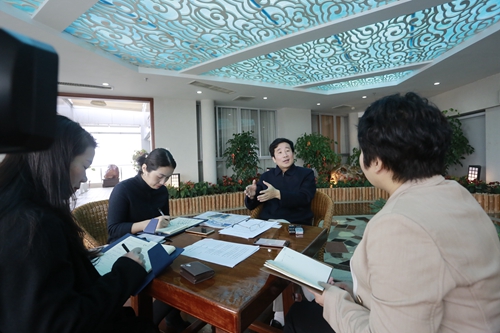 Yan Ping stressed in the interview that products and systems are the magic weapons for Yuchai to win and Yuchai will devote itself to becoming a specialized and stronger engine enterprise, unswervingly promote product innovation and system reform, strengthen talent advantages, technology advantages, manufacturing advantages and system capabilities, and accelerate Yuchai's mastery of a higher-level voice in the international arena.

How to deal with a series of challenges brought about by the development of the "new four modernizations" of automobiles (e.g. electrification, networking, intelligence and sharing)? Yan Ping said that with the tightening of emission regulations and the superposition of the new four modernizations, the core engine function of commercial vehicles has become more and more powerful, and the demand of customers for engines has also changed significantly. Yuchai is encouraged to take customers as the center, intensify the concept of cooperation, strengthen coordination and renovate the mode of cooperation through upstream, downstream and even cross-industry cooperation in the industrial chain. Yuchai will develop with mainstream vehicle enterprises simultaneously in China VI phase to match with the intelligent demand of complete vehicles, and work with upstream core component suppliers to ensure the linkage of the whole value chain. Meantime, Yuchai will actively arrange car networking and big data services and develop a powerful intelligent service platform of Yuchai power data, to collect the data of product power, operating conditions, oil consumption and others in the whole life service cycle.

Regarding the significance of the upgrade of China VI emissions, Yan Ping said that the implementation of China VI emission standard marked the rapid development of China's engine enterprises in catching up with world-class enterprises and accelerated the reshuffle of the industry. Yuchai, according to the global best development and manufacturing standards, grasped the opportunity to take the lead in completing the development, verification and vehicle supporting of full series of China VI engines in the industry with huge investment and its accumulated technological reserves and talent pool. All performance indexes have reached the world-class level. Meanwhile, Yuchai gave full play to the advantages of a late comer, built and put into operation a new China VI factory that meets the standard of industry 4.0 in Germany, with the equipment capacity at the world advanced level, adding power to the implementation of China VI emission standard.

Yuchai has long adhered to international strategy. Yan Ping believes that selling products all over the world, having research and development bases covered worldwide and gathering world-class talents are the basic standards for Yuchai to go global. After decades of development, Yuchai has increased its supporting exports and self-support exports, and strengthened the overseas development capability of various business sectors. Its products are exported to more than 180 countries and regions in the world. It is jointly developed with famous foreign scientific research institutions such as Austrian AVL Company and European and American vehicle enterprises, and fully participates in the international market competition. Cooperating with MTU and other well-known international enterprises, it strives to expand Yuchai's product chain further, enhance brand influence, introduce first-class talents from domestic and foreign advanced enterprises and consolidate the talent pool.

Yan Ping pointed out that although Yuchai has gained a lot on the road to internationalization, it still lags behind the world's advanced level. Based on the awareness of its lag, Yuchai introduces Huawei IPD, reforms Yuchai's system and speeds up the reconstruction of the R&D, quality, production, management, sales and people's concepts according to global advanced enterprise management system. Focusing on high-end orientation, Yuchai optimizes the global industrial layout, concentrates on the development of emerging industries such as the dominant engine industry and new energy resources, continuously moves towards the internationalization of product, talent, R&D and market, and accelerates to become one of the world's first-class enterprises.