Currently, a batch of King Long Longwei II buses equipped with Yuchai YC6L engines are delivered to Sri Lanka Transport Board. It is the first time for a state-owned transport enterprise in Sri Lanka to purchase luxury buses and Euro IV engines in Chinese brand. 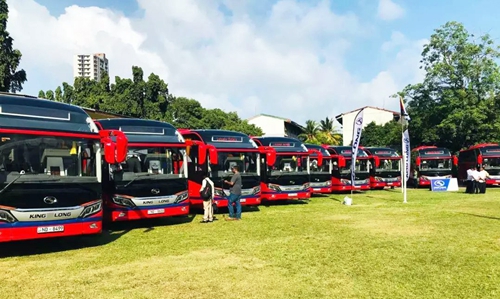 Ranil Wickremesinghe, Prime Minister of Sri Lanka, attends the ceremony to witness the delivery, personally cuts the ribbon for the new buses, and gets on a bus for test drive. "This batch of super luxury buses will provide people in Sri Lanka with a high-quality transportation experience," he praised after experiencing the strong power and comfort of the luxury bus.

Since 2012, Yuchai has marched into Sri Lanka with YC6L and YC6J engine-mounted bus models. Up to now, there have been 900 Yuchai engines locally on hand, ranking the top of China's drive brands.

Sri Lanka, known as "the last tear in the Indian Ocean", has become a popular tourist destination in recent years with its picturesque coastal scenery and distant peaks and mountains. In Sri Lanka, there is also congested intercity traffic unique to Southeast Asian countries.

For tourists from all over the world, apart from taking the train to enjoy the green mountains and the fairytale sea world, the most essential thing is to take the tourist bus to explore the mysterious culture of Sri Lanka. For local residents in Sri Lanka, buses and passenger buses have become the most common means of transportation due to economic development and road conditions.

Yuchai, as a supplier of electric buses with the largest inventory in Sri Lanka, is quietly escorting people's travel with high-quality power and services.

In Sri Lanka, the natural landscape is greatly retained for roads, and the national highway is mainly composed of two lanes with two directions. For example, in Colombo, Sri Lanka's capital, public transport to and from other cities is underdeveloped. With the increase of vehicles year by year, it is often faced with poor road conditions and serious traffic jams, so that the traffic between cities is extremely inconvenient.

In an effort to improve transportation and living standards of people, a state-owned transport company under the Ministry of Transport of Sri Lanka invited bids for new long-distance buses at the end of last year. Relying on the good reputation accumulated by King Long and Yuchai in Sri Lanka for many years, Longwei II buses equipped with Yuchai YC6L engines won the bid with its bright appearance and hard core.

This batch of buses will undertake the task of passenger transport between Colombo and other cities in Sri Lanka, which will greatly improve the intercity transport service level of Sri Lanka and elevate the travel quality of local people and the international level of Sri Lanka's transport sector. It is also an important initiative to enhance the image of the capital Colombo.

According to the latest requirements of Sri Lanka, the engines of this batch of buses shall meet the Euro IV emission standards. Due to the road conditions in Sri Lanka, it is difficult to overtake in two lanes in both directions, which requires strong acceleration performance of vehicles to overtake by crossing the line and sufficient low-speed torque as well. The YC6L engine has a low-speed torque of 1280 N·m, enabling quick start and acceleration of bus, so that the bus can be driven more easily.

After years of word-of-mouth dissemination by local customers, Yuchai engines have already penetrated deeply into people's minds. In 2013, 100 Yuchai YC6J engines were delivered to Sri Lankan customers with Yutong buses to make travel easier for residents. Up to this year, these vehicles have been running stably for nearly 6 years, with a mileage of more than 700,000 km and basically free from any engine failure that causes vehicle outage.

My car has traveled nearly 740,000 km. "I follow the guidance of Yuchai technicians to maintain the engine attentively. Up to now, the engine is still in good condition. I feel at ease during the driving with tourists every day." Ajith Ranasinghe, a local driver, said.