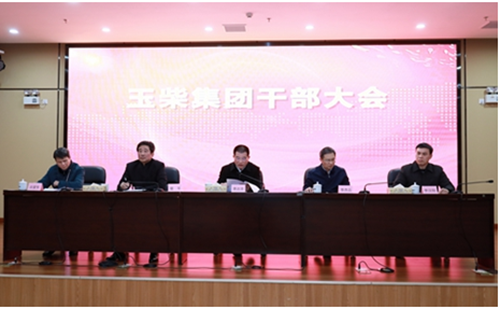 Mo highly affirmed the achievements made by Yuchai Group in recent years in enterprise reform and innovation-driven development under the leadership of Comrade Yan Ping, and briefly introduced Comrade Li Hanyang. He said that Comrade Li Hanyang has been working in Yuchai for a long time and is familiar with the production and operation of Yuchai and the development of the machinery manufacturing industry, and is a cadre with rich leadership experience gained from multiple positions. Mo hopes that the leading body and the cadres and workers of Yuchai Group will consciously align their thoughts and actions with the decisions and arrangements of the Party Committee of Guangxi Zhuang Autonomous Region, raise political awareness, bear overall considerations in mind, fully support Comrade Li Hanyang in his work, work together with one heart and one mind, and make concerted efforts to jointly create new performance and open up new prospects for Yuchai Group.

The year 2021 marks the 100th anniversary of the founding of the CPC, the launch of the "14th Five-Year Plan", and the 70th anniversary of the founding of Yuchai. Mo proposed four requirements for the future work of the leading body of Yuchai Group: First, Yuchai should adhere to the overall leadership of the Party, effectively play the leading role of the Party Committee of Yuchai Group, always adhere to the Party's overall leadership with respect to SOEs as a major political principle, give full play to the role of the Party Committee of the Group in setting the right direction, keeping in mind the big picture, and ensuring the implementation of Party policies and principles, adhere to the socialist development direction of SOEs, and ensure that the decisions and arrangements of the Central Committee of the CPC and the Party of Guangxi Zhuang Autonomous Region are well implemented in Yuchai. Second, Yuchai should embrace responsibility with passion, strive to break new ground in reform and development, fully recognize its opportunities and challenges at present, pinpoint the direction and sequence of its reform and development, strengthen confidence in development, strengthen internal governance and control, and further promote the high-quality development on the current basis. Third, Yuchai should focus its effort on Party building, conscientiously strengthen the capacity building of its leading body and cadres, effectively play the role of fighting fortress of the Party organization and the exemplary vanguard role of Party members, adhere to the principle of democratic centralism, give play to the overall role of the leading body and maintain the unity of the leading body, attach great importance to the building of the cadre and professional talent teams, and provide solid talent support for the high-quality development of the enterprise. Fourth, Yuchai should strictly and practically do a good job in improving the Party's work style and building clean government, raise the political stance, adhere to strict and law-based governance, conscientiously fulfill the system of "dual responsibilities for one position", and strive to create a clean and upright working environment.

On behalf of the SASAC of Guangxi Zhuang Autonomous Region, Li Jieyun proposed three requirements for the leading body and the work of Yuchai Group in 2021. First, Yuchai should race to the top, embrace responsibility with passion and work hard, study and implement the guiding principles of the Fifth Plenary Session of the 19th CPC Central Committee and the Central Economic Working Conference, implement the arrangements made at the 9th Plenary Session of the 11th Party Committee of Guangxi Zhuang Autonomous Region and the Economic Working Conference of Guangxi Zhuang Autonomous Region, fight the first battle in the new year, spare no effort to ensure a good beginning in the first quarter, and make new contributions to accelerating the transformation and upgrading of the region, and improving both quality and efficiency. Second, Yuchai should deepen reform, stimulate vitality, accelerate the establishment of a modern enterprise system with Chinese characteristics, improve the corporate governance system, and take a lead and establish a benchmark in the three-year action for SOE reform. Third, Yuchai should unswervingly strengthen Party building, gather strength, deeply integrate Party building into corporate governance, and adhere to and strengthen the Party's overall leadership over SOEs.

Li Hanyang expressed his thanks to the Party organization and superior leaders for their trust, Comrade Yan Ping for his outstanding contribution to Yuchai's development and the valuable economic, cultural and spiritual wealth left behind, and Yuchai's builders for their hard work, and to Yuchai for providing him with a career platform. Li pointed out in his statement that running Yuchai is a heavy responsibility on his shoulder and a glorious mission, and he will never retreat in the face of great responsibilities, and will definitely perform his duties under the guidance of the Party Committee and the People's Government of Guangxi Zhuang Autonomous Region, keep fighting, never slack off, work hard, consciously accept the supervision of the organization and the cadres and workers, unite and lead the cadres and workers of Yuchai to make concerted efforts, turn the development blueprint of Yuchai into reality, and strive to push the development of Yuchai Group to new heights.

Gu Tangsheng made a statement on behalf of the leading body of Yuchai Group, and said that he firmly supports and obeys the decision of the Party Committee of Guangxi Zhuang Autonomous Region, and will take the lead in maintaining the unity of the leading body with Comrade Li Hanyang as the "team leader", and fully support and cooperate with Comrade Li Hanyang in the work as always. The leading body of Yuchai Group will strive to write a more magnificent new chapter in Yuchai's development with higher standards, stricter requirements, more realistic work style and greater courage, and make greater contributions to the preservation and appreciation of the value of state-owned assets and to the economic and social development of the whole region.

Wang Jie, Director of the Corporate Governance and Management Division of the SASAC of Guangxi Zhuang Autonomous Region, Qiu Chaoyong, Deputy Director of the Sixth Division of Cadres under the Organization Department of the Party Committee of Guangxi Zhuang Autonomous Region, and leaders of Yuchai Group at middle level and above attended the meeting.